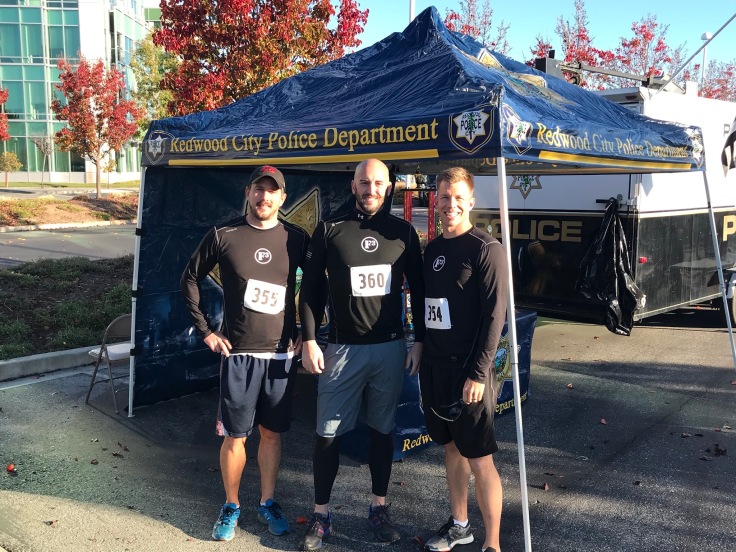 12/16/17
QIC: Turnimus
PAX: VanGogh, Bada Bing, FNG Data, Peyton, Choppa, Turnimus
Warm up :
10 Overhead Arm Circles (front and back)
10 Cross body arm stretch (left and right)
15 Imperial Walkers I.C. 3ct
20 SSH
15 High Knees I.C. 3ct
1 Black Snake lap around the track
-Take an Indian Run, but the last guy has to weave his way through the Pax to the front of the line.
Thang :
Mosey back to the parking lot. Circle Up.
100 Merkins in 5 minutes.
-This should be tough and precaution was giving to pace. If this was easy for you, you not getting enough of a bend in the elbows. No protractors were brought.
Block Brigade
-Mosey to the truck to grab our coupons. Unload the concrete blocks, brigade style. As instructed by the QIC, we kept the blocks overhead, until everyone had a coupon in the air, then we walk back to the A.O……blocks overhead the whole way. Line up at the sideline, blocks in front of you.
Black Jack
-Start on the sideline of the football field. Perform 20 Overhead Shoulder Presses with block – run to other sideline – perform 1 Merkin. Run back and do 19 Overhead Shoulder Presses with block. Run back for 2 Merkins. Repeat until you do 1 Overhead Shoulder Press and 20 Merkins, running between the sidelines. Always adds up to 21 – BLACK JACK!
1 Black Snake lap around the track.
Colt 45’s
-Grab those coupons….15 reps from the bottom of the movement up to the halfway point of a curl. 15 reps from the halfway point up to the top of the bicep curl. 15 reps Start at the bottom of the movement and complete a full range of movement all the way up. O.Y.O.
Triple Check
-3 men did a while sit, while 2 planked and 2 ran across the width of football field and back.
AMRAP to finish off the last 10 minutes.
C.O.T.
Prayers and thought of support go out to Bada Bing’s parents and especially to his father who is dealing with Alzheimer’s and health issues related to the disease.
NMS
Today’s group was a lean, mean, fighting machine and we dubbed ourselves the Magnificent 7.
Scuban’s social media skills came thru as he snared in an FNG. Welcome DATA via the Nextdoor app. Much chatter was had about how the group aspect of the workout is the only reason we are out there. Sad Clown syndrome being defeated by fellowship. Leave no man behind, But leave no man where you found him.
Coffeteria at Whole Foods/Peets as this is quickly turning into the Pax’s preferred location.
Another VQ on deck next Saturday as ’88 takes the helm. #cervezasalute in order
Get there!!

Every Saturday At 7am

BASH AT THE BEACH